Nuclear imaging is like an x-ray, if an x-ray image were taken from the inside. Rather than standing in between the x-ray machine and the film, patients are instead injected with a radioisotope. This material, often referred to as a “tracer,” emits gamma radiation from inside the patient and is detected by an imaging device, which the patient sits in or near. 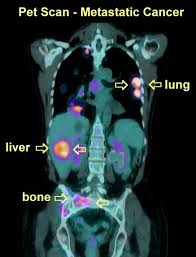 PET scan showing cancer that has metastasized. Source: About Cancer.

This process is made much more effective by careful selection of the radioisotope to inject. Body tissues such as bones and blood absorb various isotopes at different rates – which means that a medical team can image a specific area, while limiting the radiation exposure for the rest of the patient’s body. For example, because the thyroid gland absorbs iodine quickly, iodine-123 is an excellent choice of radioisotope for creating an image of the thyroid before the iodine can be absorbed by other tissues.

Likewise, because cancer is a fast-growing tissue, it consumes much higher levels of sugar than the rest of the body does, which means that it can be precisely targeted with a radioactive sugar molecule. Positron emission tomography (PET) scanning for cancer uses this technique: an otherwise non-radioactive sugar molecule is chemically attached to an atom of radioactive fluorine-18, to make fluorodeoxyglucose (FDG), which concentrates heavily in cancer tissue after injection.

Tracing techniques can also be used to assess bone growth, areas of restricted blood flow, and to produce time-lapse functional imaging of organs such as the brain, heart, liver, lungs, and kidneys.

Continued advances in research allow life-saving nuclear diagnostic procedures to become more precise, while limiting radiation doses. According to the Health Physics Society, common nuclear medicine procedures involve doses between 1.8 to 14.1 millisieverts, or between 0.6 and 4.7 times the dose received annually from natural background radiation in most parts of Canada. These doses, while higher than for simpler procedures such as x-rays are considered very safe, especially as they provide life-saving information.

The truth is that all people are naturally radioactive, with or without injected radioisotopes – but this level is very temporarily elevated after an injection.

Radioisotopes injected for imaging are strategically chosen to be those that exit the body very quickly. This happens by two separate methods – the natural radioactive decay of the isotope to its stable version, and by excretion, mainly through urine.

As an example, 80% of FDG injected for a PET scan is eliminated from the body through natural radioactive decay (FDG has a half-life of 1.83 hours), while 20% is eliminated through excretion. As seen in the graph, less than 1% of the initial compound is left in the body after 12 hours. Most patients do not require any special instructions after the procedure and are free to go home. Even so, patients should defer to any instructions that their medical teams may provide.